Disney is one of the biggest companies in the world, an international powerhouse. You can’t turn the corner without seeing a Disney franchise. Yet, it somehow feels like they slip under the radar. The question we’re always asked is, “What does Disney own?”. The answer is nearly everything! But, the most important question is, who owns Disney?

In this article, we answer the question of what does Disney own? And, who owns Disney? We delve into the different subsidiaries you’ve most likely come across but didn’t know Disney owned them. Let’s check it out.

What does Disney own?

In this section, we look at what does Disney own? It’s a question we’re asked often. Disney owns numerous companies, and below, we have broken down which companies Disney currently owns and the stake Disney holds within each:

It feels like Disney owns everything, with countless movie franchises under their belt and some of the biggest names like the purchase of 20th Century Fox in recent years.

This has also added to their bulging portfolio; with offerings of endless franchises (Marvel and Star Wars), Disney owns many films and companies.

One company that we find people are unaware that Disney owns part of is GoPro. Disney’s reach has come so far that it’s almost impossible to determine what companies and franchises Disney owns.

It is an impressive set of companies that Disney owns, and they’ve done it well and under the radar. They’re one of the biggest media companies in the universe, yet it still doesn’t seem to feel like it. Disney owns so many franchises and superhero films, from Indiana Jones to The Muppets; they own them all.

Disney+ (Disney’s rival to Netflix and Prime) shows its wealth with its vast catalogue of incredible programs, movies, and documentaries they have on offer.

Check out the infographic below it shows who and what Disney owns – as you can see, Disney owns a vast array of companies both in the film industry and out. Disney’s acquisition techniques have led them to acquire many subsidiaries. 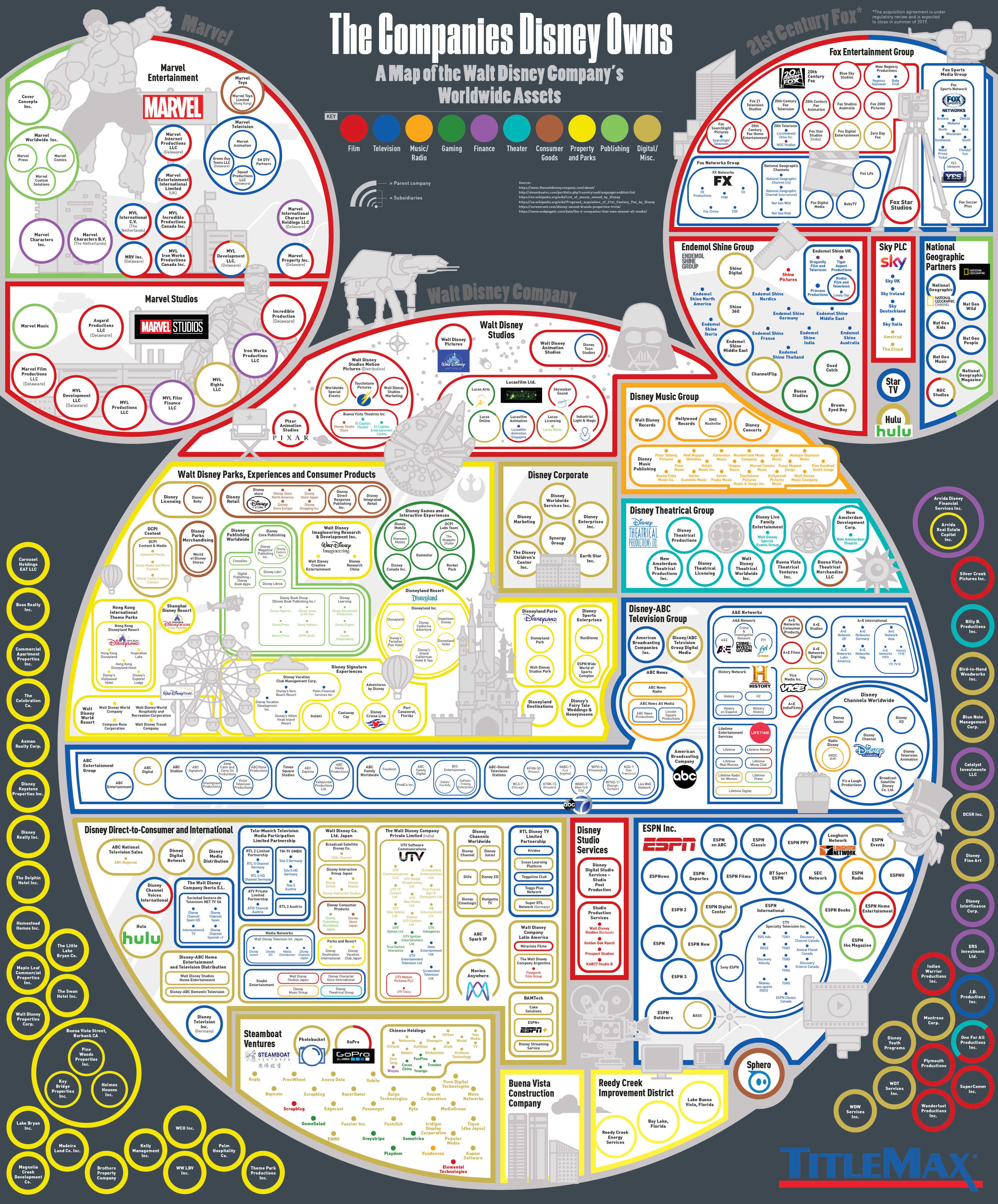 We’ve delved into the realm of what Disney owns, but we haven’t explored who owns Disney?  Disney was founded and owned by Walt Disney and Roy O. Disney (yep, Walt’s brother).

It was originally known as the Disney Brothers Cartoon Studio. Initially, Walt Disney wanted to become a vacuum salesman; all those Disney classics hoovered up.

The answer to who owns Disney? Is that no one owns Disney specifically, and Disney is owned by a large number of shareholders. If you scroll down a little further, you can see who these shareholders are. Some are individuals, others massive corporations!

Who is Disney’s current CEO?

The current Disney CEO is Bob Chapek. Bob Iger was the CEO from 2005 to 2020 and has now stepped into an Executive Chairman role at Disney.

Before Bob Iger took on the role, Disney didn’t have as many brands, franchises, and companies under them as they do now.

Bob put a lot of time into acquiring businesses to grow Disney’s portfolio and get them to their size today.

Who is Disney’s biggest shareholder?

Here we break down the top 10 shareholders in Disney. The top 3 shareholders currently are The Vanguard Group Inc with 127 Million share options. BlackRock Fund Advisors following up in second with 76 Million shares.

How many companies does Disney own?

Disney owns an incredible amount of businesses, an endless list. They own companies from ESPN to ABC Family Worldwide and even have their hand in businesses such as GoPro.

The list is huge; check out the full breakdown here; it will blow your mind.

What film franchises does Disney own?

Disney owns a lot of your favourite film franchises. Disney franchises are pretty well known, and in fact, you’ve probably heard of most of these franchises.

Disney’s well known for their subsidiaries, but they’ve added a substantial amount of franchises recently to their catalogue.

My favourite is Star Wars. It was an acquisition Star Wars fans potentially thought would destroy the brand, but they’ve produced incredible films and have added to the legendary film franchise.

P.s we love the Mandalorian too, but what’s with the episode lengths?!.

This is a huge selection of multiple franchises, all in different sectors of media – and ones that perform highly, there are also a lot more franchises Disney owns, and we’ll see even more coming over the next few years. Disney is acquiring franchises at rocket speed.

These acquisitions have helped Disney grow into the monster of today’s company; we can only see this slowly getting bigger and better throughout the years.

How Many People Work at Disney?

The number of people who work for Disney exceeds over 210,000 people – pretty incredible for a couple of brothers with a big dream!

This is only going to grow and grow, judging by the success of recent acquisitions and the projects they have coming up – exciting times for Disney ahead.

You may also be interested in: What is a film treatment and how do I create one?

What Was Disney Originally Known As?

Disney was originally known as the Disney Brothers Cartoon Studio from 1923–1926 when the business was first created. They moved onto The Walt Disney Studio for the next three years, from 1926–1929.

They then moved on, naming the company Walt Disney Productions from 1929–1986.

Now Disney is known as – The Walt Disney Company or, simply put, Disney. We hope this article on what Disney owns was helpful to you! It’s incredible what Disney does own, and I’m sure we’re in agreement that Disney will be growing their subsidiaries a huge amount over the upcoming years.

Further Reading: How Much Do YouTubers Make? The Ultimate Guide

Is Disney owned by the Disney Family?

What studios does Disney own?

As mentioned above, Disney owns a lot of studios you would have heard about. Disney is known for their film studio division known as The Walt Disney Studios, and these include the following film studios:

Does Disney own all of Marvel?

When did Disney buy Marvel?

Disney bought Marvel on 31st August 2009. They paid $4 billion for Marvel Entertainment. This meant that the Marvel shareholders would receive $30 and approximately 0.745 of Disney shares for each share they owned within Marvel.

Does Disney own Pixar?

Yes, yes, they do. Disney does own Pixar.

Disney bought Pixar in 2006 for $7.4 billion in 2006. This acquisition by Disney meant that Steve Jobs became the largest shareholder of the company and a member of Disney’s board.

At the time, Disney’s CEO, Bob Iger, had the quite controversial idea that Disney would buy Pixar. This was due to the opinion that Disney’s animation arm was significantly behind the competition’s.

Does Netflix own Disney?

Netflix wouldn’t have the financial power to buy Disney, so they will continue to battle it out to see who can get the most subscribers.

Read Next: What is the most popular show on Netflix?

Is Shrek from Disney?

What does Disney own – Frequently asked questions.

We’re constantly asked who Disney owns, who owns Disney, what franchises they own and the different Disney subsidiaries that are out there. So we thought we’d help answer these questions in this section.

We look at the multiple questions asked about the Disney brands and help you answer those burning questions. Here are a few frequently asked questions on who Disney owns and Disney’s subsidiaries.

Does Disney Own Warner Bros?

In the first part of 2021, they considered buying the DC Comics umbrella of Warner Bros, but that fell flat. It would be an interesting move if they did pull it off, as Disney owns Marvel Comics.

Does Disney Own Dreamworks?

The quick answer is no, Disney does not own DreamWorks. ​​For reference purposes:

Therefore, Disney has no ownership stake in DreamWorks.

Does Disney Own Harry Potter?

Disney does not own Harry Potter, nor do they have any licensing agreements for Harry Potter. Warner Bros. owns Harry Potter which is why the Harry Potter series is not currently on Disney Plus.

However, Disney did try to land the Harry Potter World theme park but the deal never materialised.

Does Disney Own Bob’s Burgers?

It’s a question we are asked quite often, and surprisingly yes, Disney does own Bob’s burgers. Bob’s Burgers is one of the Disney owned companies – quite surprising, some say!

If you scroll further up in the article, we discuss the different subsidiaries Disney owns, and one of those is Fox’s entertainment. Fox Entertainment has Bob’s Burgers as an asset; therefore, when they acquired Fox Studio’s, Disney then inherited Bob’s Burgers. So yep, Disney does own Bob’s Burgers.

Does Disney Own Universal Studios?

Does Disney Own ESPN?

Disney does own ESPN. In fact, ESPN is jointly owned by The Walt Disney Company (80%) and Hearst Communications (20%).
In 1996 Disney acquired ESPN, in what is seen to be a pretty impressive acquisition as well as being an incredibly successful one too.

Does Disney Own HBO?

Is Nickelodeon Owned By Disney?

Disney doesn’t own Nickelodeon, Nickelodeon is owned by Paramount Global. Paramount owns Nickelodeon through their domestic network division.
We hope this article on “What Disney owns: An in-depth breakdown of Disney’s assets.” was useful to you, and let us know your thoughts down below in the comments.
Scroll a little further to see our latest screenwriting and filmmaking resources and blog. If you enjoyed this article on what Disney owns we think you’d enjoy our breakdown of the best free transitions in Premiere Pro and our deep dive into the most Iconic logline examples.

What Does Disney Own From 20th Century Fox?

How Much Did Disney Buy 20th Century Fox For?

$71.3 billion. Disney bought 20th Century Fox on March 20, 2019. This acquisition was huge for Disney and allowed them to own some big-name franchises, including Family Guy and The Simpsons.

How Does Disney Own The Simpsons?

Does Disney Own Hulu?

Disney doesn’t own the whole of Hulu, but Disney does have a large stake in Hulu. Disney owns 30% of Hulu, and they acquired this as part of the March 20, 2019 acquisition of 20th Century Fox.

How Much Did Disney Buy Star Wars For?

Disney bought Lucasfilm (including Star Wars) on October 20, 2012. This cost Disney $4.05 billion. Disney paid for this half in stock and the other half in stock. Not a bad deal for Disney in the long run. They’ve taken Star Wars to the next level and have produced some great films.

Does Disney Own GoPro?

Is Harry Potter On Disney Plus?

Disney Plus has a plethora of programs for you to watch. But unfortunately, the Harry Potter series is not on Disney Plus!

So there you have it! As you can see, Disney has a massive stake in not only the film and entertainment industry, but the news industry with the purchase of several Fox channels within the 20th Century deal. What do you think is next on the agenda for Disney ownership! Let us know in the comments below.

How to create a text template in Premiere Pro

The Kuleshov Effect: Everything you MUST know

1 thought on “Who Owns Disney And What Does Disney Own?”